Writing funny mysteries (and more!) for you.

There’s a lot of cozy mysteries out there, but so far I’ve only found a few that are really hilarious. For me, this first adventure of Gertie Johnson, a sharp sixty-six-year-old widow in the wacky wilds of Michigan’s Upper Peninsula, hits all the right notes.

There’s a lot of cozy mysteries out there, but so far I’ve only found a few that are really hilarious. For me, this first adventure of Gertie Johnson, a sharp sixty-six-year-old widow in the wacky wilds of Michigan’s Upper Peninsula, hits all the right notes. 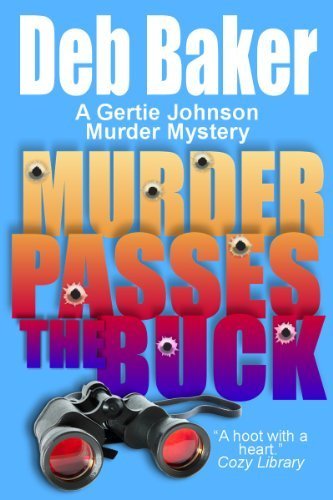 No Seriously, It Keeps Being Funny…

I’m not kidding about “relentless”. Watch, I’ll open the book at random and see how long it takes to hit a funny part.

(Yes, this is tricky with an ebook, but I’ll manage…there’s the big scrollbar…location?  …how about 1937, why not…oh look, chapter 9…skim…this works…)

I was learning a lot about being a detective, but I know I had so much more to learn. There’s nothing like the actual experience to teach you the finer points. Like what happened last night. It wasn’t Little Donny’s fault our cover was almost blown–I take full responsibility for it. Next time I go on a surveillance mission, I won’t leave my truck smack dab in the road for everyone to see. All my life I’ve had to learn things the hard way, or so it seems.

And that’s only the mid-level, average-page humor. When it peaks you get truly ridiculous situations … like that “surveillance mission” she mentions …

First off, she prepares for the mission…

I wore my fishing vest under my hunting jacket and it was fully loaded. I had pepper spray, ammo, hand and foot warmers, and a thermos of Tang. The stun gun was tucked in my purse, and my shotgun lay on the cab floor. I had dressed for subzero weather because this was a surveillance run, and we were going to be outside.

Unfortunately, the suspects are at home.

“Let’s sneak around back and take a peek inside the window,” I said, dropping down from the truck. The weight of my weapons vest almost bowled me over face first.

More unfortunately [SPOILER ALERT] they have a guest…

… we heard knocking at the front door. Stopping and peering in a dining room window, I saw Bill [one of the suspects] move through the house. The window gave us a perfect view of the front door when Bill opened it.

Little Donny stood on the porch.

“Can I talk to my granny?” we heard Little Donny say. He craned his neck to look around Bill.

Yes, her goofy teenage grandson comes asking about her _while _she’s spying on the house.

And the scene only gets better…

The thing about Gertie is, she’s an amateur detective on her first case, and she never loses her wry self-aware humor at her own mistakes.

Sometimes that wry humor bites a bit — she pays an awful lot of attention to people’s extra weight, hair loss, and other less-than-gorgeous facets of personal appearance.

But it’s hard to say how much of that flows from Gertie’s own pain at aging and other losses … every so often she’ll let slip a moment of honesty that makes you feel even more connected than the laughs.

If you want to check it out, Murder Passes the Buck was only $2.99 last time I checked. And if you’re on Kindle Unlimited, the entire series is currently free.

Click here to see Murder Passes the Buck by Deb Baker on Amazon.

What about you? Any favorite hilarious mysteries?

I’m always looking for new hilarious mysteries! I’d love to hear your favorites — leave a comment to let me know. Thanks!

« Does your spell checker hate you? When Do Your Fellow Readers Quit Reading a Novel? »